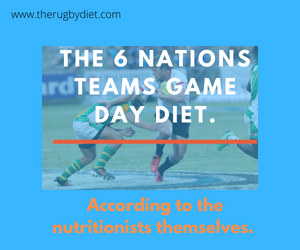 There’s been many thousand words written and many hours of youtube footage about the extreme nature of the training of professional rugby players.

This provides great motivation for the young athlete and makes the ‘amateurs’ wince at how unfit they really are.

That’s not to say that much hasn’t been written about what professional rugby players eat.. Wales Online has published a number of articles, namely an article about the enormous 6000 kcals a day Dan Lydiate would consume.

What fascinates me most about professional rugby players is their nutritional strategies and how they differ from that of amateur rugby players and between teams.

This article is to get to the substance of what professional rugby players eat on game day. I thought it would be interesting to compare the 6 nations’ rugby teams’ game-day nutrition against each other to see how they differ given this lack of evidence.

It’s all well and good dreaming up this idea but how the heck was I going to get this information?

A quick google search showed some information- mainly from Jon Williams, the esteemed Welsh Rugby Nutritionist. There were also snippets of information from the English nutritionist Graeme Close on the England Rugby youtube channel.

To get the detail I wanted I was going to have to go to the horse’s mouth and contact them directly.

And so I did, I contacted each of the ‘home nations’ nutritionists and made efforts to contact the Italian and French federations for access to their nutritionists. Google translate was my friend here.

In turn, I contacted;

The French and Italian Nutritionist Names were unknown

3 out of the 6 responded. And who can blame them? It was such a busy time for them that I’m surprised that they took the time they did.

Graeme Close (GC) the England Rugby Nutritionist was first to reply and was candid in his response stating, “I would get in a world of trouble if I went into details on things like this”.

At this point, my heart sank at the thought of putting these professionals in a predicament of whether to,  could, rather than should reply or not.

However, GC then disclosed his nutritional Game Day Nutrition Philosophy, which may take you by surprise. Graeme’s philosophy for game day nutrition for a Rugby Player is to focus on fueling the day before the game.

“I believe that the main fueling day for team sports like rugby is the day before the game and then on game day”.

A similar approach is also taken by the Scottish Rugby Nutritionist Tom Loughlin (TL) where high-carb meals are consumed a day before the game, usually in the form of  “pasta-based meals with some desserts… our classic combo is lasagne, traditional carbonara and apple crumble”. Tom also goes on to state that he would include a high protein, high carb pre-bed snack too.

A slightly different approach is taken by Jon Williams (JW), the Wales Rugby Union and British and Irish Lion Nutritionist wrote in a Rugby Renegade blog post, for players not to overeat on game day or even the night before, rather he advised players to phase their carbohydrate intake over the entire week as opposed to the day before the game.

“Jon suggests that your carbohydrate intake should not be game focussed, but planned and consumed steadily over the week.”

This is to ensure there is an optimal level of glycogen storage come game day.

Notice that the emphasis on the fuelling strategies is based on carbohydrates as opposed to proteins and fats. Carbohydrates are the chosen fuel source for top rugby teams for reasons I go into in the below articles.

“Game day is mostly very simple,” says TL. Adding, players should “Eat normal quantities of food on game-day (due to prioritising carbs the evening before)”.

GC, slightly differs and states that “if all the work has been done the day before we can go pretty light pre-match meal”.

So why would there be so much emphasis on ensuring players get the majority of their nutrition dialled in the days leading up to game day as opposed to the day itself?

One very plausible reason is nerves. If players are reliant on fueling primarily on game day then there’s a lot of pressure on them to consume meals when they do not feel like they can consume the meals they want.

This is why JW, sees game-day nutrition as a “top-up”.

Other considerations, taken to prevent adverse consequences like “gastrointestinal distress” according to Tom Loughlin are for players to consume “no spice, no high-risk foods (e.g. shellfish), not too high in fibre”.

What could constitute high-risk foods? This could be summarised by high FODMAP foods. FODMAP foods can cause match-day irritable bowel syndrome. High FODMAP foods are types of carbohydrates that are in certain foods that have a high chance of causing bloating, IBS and gas.

So what would a typical match-day nutrition diet look like for a 6 Nations international rugby player?

You may have noticed that there is a carb-dominant theme in the days before a game and that theme continues on game day. For breakfast, GC states that his players may have a “good Carb Breakfast” which would probably include porridge, with some eggs.

TL, doesn’t state what a typical breakfast for the Scottish Rugby Team would look like but he did give a glimpse into some individualisation between players at this point where some players may feel better “eating a big breakfast when it’s a later-kick off”.

That’s not to say that other nutrients are sacrificed. JW likes to keep “keep some protein in on game day because otherwise, you find you can start to lose muscle.” A typical breakfast for the Welsh Rugby Union boys would be an omelette or scrambled eggs, some wholemeal toast, possibly some bacon and maybe some beans (link guru).

A typical pre-match meal for the English players according to GC would be a “small portion of chicken pasta”.

Depending on what time the game is, the WRU boys may consume pancakes or overnight oats if it’s an earlier kickoff, or similar to RFU pasta spaghetti bolognese for a later kick-off. JW, the reasoning for this is ‘’but not many players want that (bolognese/chicken) before 11 in the morning”.

Unfortunately, TL didn’t state what the Scottish boys would consume but I feel like it’s safe to assume that it would be similar.

Before Kick off and Half Time.

The sacred place of the changing room is a bit of an enigma when it comes to pro rugby. Unlike most amateur rugby clubs where the changing rooms are barely big enough to change. The pro players will have a buffet of energy gels, snacks, and pro-sport-informed supplements available to them in the changing room.

“Easy to digest carbs like fruit, cereal bars, soreen etc” are there if players feel hungry. Whereas sports supplements like, caffeine, gels, gums, and isotonic gels are there but are “specific to time, situation and player” according to TL.  A similar approach is taken by JW at the WRU according to these blog posts.

I should add here that JW is the director of an amazing supplement company called Pro Athlete Sports Nutrition. You should check them out here.

No shower and 10 pints for the pro boys. Well not unless you are Andy Powell.

Instead, nutrition is optimised for replenishment and fast recovery which constitutes a similar approach to pregame with a high protein, high carbohydrate make-up. TL states foods like ‘high protein shakes, chicken goujons and sweet potato chips are on the menu for the Scots.

A further post-game meal would be consumed back at the hotel.

You can read more about post-game nutrition here (in progress)

A professional rugby player’s diet is not too dissimilar to that of an amateur athlete. They still need help and support sometimes. The only glaringly obvious differences are the quantity and the laser-like precision of their dietary makeup for performance reasons.

I’d like to once again thank the contributors for their valued contribution. I was overwhelmed by their generosity in giving up their precious time for this article.

I am a master of Public Health, a Certified Sport and Exercise Nutritionist, and a former rugby player. Connect with me on Twitter to never miss a post.