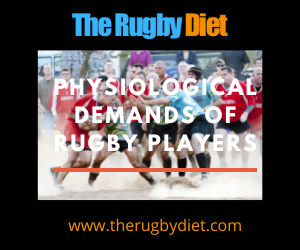 Rugby is a physiological demanding sport and a good diet is a key to meeting the physical demands of training, performing at a high level on game day, and your general health and wellbeing.

Therefore, optimum nutrition doesn’t start and end on game day. A good rugby diet must be part and parcel of everyday life.

The following guide will enable you to identify what is a good rugby diet and give you the tools to make positive changes to your rugby nutrition- straight away.

However, before we do so we must understand the energy demands and the physiological impact rugby has on the body. Understanding this will help inform you what to eat when to eat, and in what quantities.

Rugby is a game played at varying intensities. In any game we have short bursts of high-intensity effort which includes sprinting in defense and attack, tackling, rucking, and mauling. (rucking and mauling apparently optional for outside backs).

There are also long periods of low intensity where we are waiting, jogging, and watching the game unfold. Incidentally, the majority of the game is played at low intensity but rugby players must eat to prepare themselves for the high-intensity, action-packed parts of the game (the fun parts)

Therefore it is defined as being highly intermittent, with bursts of shorter high-intensity efforts, with periods of low-intensity jogging and walking, as well as multiple collisions and tackles.

We will go into this in more detail later, but for now, let’s expand on what the energy demands are for the body by looking at some research derived from the pro game.

Now I know that the pro game differs massively from the amateur game. We all know an outside half who has a body of a prop, a flanker that can play in the outside backs, or a full back that would love to play open side flanker. I know I’ve played with them :).

But I think it’s interesting to look at what the pros do because after all the reason you are reading this is to raise your standard and if you can benchmark your game against the best, you can start to look at improvements. Let’s look at some numbers;

A Brief Summary of Energy Transfer

Firstly, it is important to understand that we do not produce energy in the body. According to the laws of thermodynamics, which describe the rules by which the physical world is organised, energy is never really created or destroyed. Rather energy is transferred between entities.

So the term burn some energy or fat is false.

What our bodies do is convert energy from food we consume or from fat stores in the body. When we talk about energy transfer, this is what we mean. And as you are about to learn, the body is more efficient at transferring energy depending on the exercise performed and the macronutrient consumed and this is important when it comes to Rugby performance.

There are three main energy systems that are of importance to us, these are;

The atp-PCR system is the first energy system to kick in when you start to exercise.  It works by rapidly regenerating ATP (adenosine triphosphate) from ADP (Adenosine Diphosphate) and phosphate (making 2 phosphates into three). It uses an enzyme called creatine kinase to break the phosphocreatine bonds to create creatine and a new phosphate molecule (see why creatine supplements work? It makes this process more efficient). As the bond is broken it releases energy into the cell, as well as creatine and phosphate to create more ATP. However, this is quite inefficient and this system can only last for around 10 seconds before fatigue which is why after 10 seconds of sprinting we have to slow down.

This pathway is ideal for exercise and competition between 10-80 seconds. This energy system primarily uses glycogen (sugar) stores from within the body to create ATP, but as this system is a slow process it does not last for long.

As maximal exercise activity lasts beyond the 80-90 second mark, we are forced to slow down as this pathway can’t maintain the intensity of the other two as it is slower to generate energy. However, this pathway is highly efficient for long-distance running and can provide energy for days on end. After all, this is what our body uses for our day-to-day existence. This energy system primarily relies on the body’s fat stores.

Now we know this, we can make an informed decision about what macronutrients we should be consuming to perform optimally.

I am a master of Public Health, a Certified Sport and Exercise Nutritionist, and a former rugby player. Connect with me on Twitter to never miss a post.